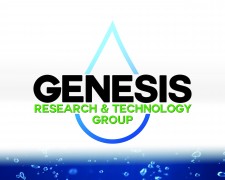 DALLAS, September 26, 2017 (Newswire.com) - Oil companies typically dispose of their produced and flow back contaminated water by transporting the barrels to underground disposal well facilities. Recycling and cleaning the water on-site has never been an option until now. Genesis Research and Technology Group has developed, tested, and patented a revolutionary system with proven results that have a three-year track record. Asia, Eastern Europe, and Mexico have been using the proprietary technology and the results are impressive. The green footprint can utilize solar technology as an option to power the systems while the barrels of water are being treated at a rate of up to 20,000 barrels per hour all without chemicals.

The cryptocurrency exchange has seen some green technology; but, on September 27, 2017 the Genesis systems will be available on the blockchain market. Michael Lagow, CAO of Genesis Research and Technology Group states, "Our company's patented system of multistage advanced oxidation and ultrafiltration removes contaminants so that an oil company can re-use the 'clean, green' water again." The global rollout of the Genesis System is slated to happen in late 2017 and has already been vetted by a variety of third-world countries for implementation.

A Genesis water recycling system will allow oil producers to be friendlier to the earth's environment, conserving water, not exposing the roads and countryside to the millions of trucking miles necessary to transport water and not dispose of millions of gallons of contaminated water in the ground.

The cryptocurrency green model strives to reduce the carbon footprint in a global world and clean water on location without unnecessary transportation. Ron Price, CEO of Genesis Research and Technology Group says, "A Genesis water recycling system will allow oil producers to be friendlier to the earth's environment, conserving water, not exposing the roads and countryside to the millions of trucking miles necessary to transport water and not dispose of millions of gallons of contaminated water in the ground." The blockchain is evolving into a new generation of ITOs where the green footprint provides investors an opportunity to join an eco-friendly environment.

MVP Asia Pacific CEO, Darren McVean stated, "The Blockchain represents amazing potential for the environmental and land rehabilitation sectors. In the past, governments and community groups have had limited to no access to land, water and air quality records. As a result, few have confidence in the records and this has stifled investment in environmentally friendly technology. We believe that by incorporating blockchain technology to the proven Genesis RTG water treatment process on a large scale, we can realize huge environmental benefits and also propel the blockchain industry."

MVP Asia Pacific Inc has recently announced the formation of the OpenLedger MVP Blockchain Innovation Laboratory which will be announcing university partnerships around the world. The first partner university is expected to be announced in early October.

About Genesis Research and Technology Group: Genesis Research and Technology Group is a U.S.-based company that has developed a patented, state-of-the-art technology that provides clean reusable water for the world’s population. The Company exploits its chemical-free technology as its efforts are being recognized by several leading government agencies developing and implementing Green technologies to protect and preserve our earth's resources.

Genesis Research and Technology Group provides custom-built state-of-the-art water treatment technologies for all types of water. Years of research and development go into perfecting this technology that allows Genesis to offer its clients a sole source, reusable water filtering and cleansing technology that is totally chemical free.